Li San Ge's face immediately darkened. He simply asked, "Then let me ask you. If it weren't for Ah Jian, would we be able to make charcoal? We just learned it, and now you want to cast them aside. Can your conscience be at ease? They didn't ask for any money when teaching us. You also know that those who know how to make charcoal wouldn't be this generous. If you do this kind of thing, would you have any face to meet them in the future? Now pack away those thoughts as soon as possible. If dad and mum hear it hear it, you'll get a good scolding for a while!"

Mrs. Zhao felt embarrassed or anger hearing these word, and discerningly pointed out with flushing cheeks, "Ah Jian isn't part of Lian Family, so how did I go against my conscience? I'm doing this for our family. Look at what you're saying as if I was doing it for myself. From what I see, you're the one who's heartless, to accuse me like this!"

She spoke with reddened eyes and nearly teared up.

From the start, Li San Ge wasn't a fine talker like Mrs. Zhao, so hearing those words, he couldn't refute. In a fit of anger, he stomped his feet and bellowed. "You better say less! No matter what, this matter not going to happen!"

Aunt Zhang saw her son and his wife were whispering in the courtyard. When her son suddenly raised his voice, it nearly scared the hell out of her. With a frown she chided. "Why are being so fierce to your wife? What? Is it because you feel more superior now that you know how to make charcoal? We still have yet to sell the charcoal for money, and you're already causing a scene! Now stop talking!"

"Mmm." Li San Ge didn't say anything, just sulked out a faint response to let this matter vaguely pass and walked away. He knew if he explained, his wife would definitely be scolded.

Mrs. Zhao saw that he didn't say anything, her tense heart relaxed.  She stood there alone, staring blankly into space. Then let out an aggrieved sigh and also went back into the house.

Since he got free time, Lian Ze went to the backyard and practiced the basics again.

Now is the middle of October, still have not become winter yet. Charcoal has yet to be sold on the street.  In a moment, the four of them was immediately troubled.

They stood out a lot when their cart entered the town. Many people that passed by thought how once winter comes, they'll need charcoal and if they buy it now, maybe they'll get it a cheaper. So they then went up to bargain the price.

How would Lian Fang Zhou and the others know the price? The four of them stared at each other. Uncle Li and Li San Ge were so nervous that they started to sweat.

No matter what, they had already come here and ended up pulling back everything. Anyway, the woods in the mountain isn't worth much.

Just when Uncle Li gritted his teeth and planned to give a random price, Lian Fang Zhou had already spoken out. "We're not selling the charcoal yet, need to wait a moment.

Those who heard this answered with an 'oh' or mumbled and left. There were some who was extremely curious and stuck around to find out the reason and also wanted to get a price no matter what. "Why aren't you selling it now?"

Lian Fang Zhou was somewhat mad on the inside and indifferently said, "If you want to know, come back later!"

Seeing the situation, some people just let it go, while others became a little angry. One of them said, "You're so unreasonable, little girl. You already brought it town and if you're not selling it, are you planning on pulling it back like this? The adults in your family have yet to speak. What can a little girl like you understand!"

Although Uncle Li doesn't know why Lian Fang Zhou said it like this but seeing her being snapped at, obviously he would help her. "What my niece said counts.  Come back later!"

Only then did those people unwillingly left. When they walked away, a good few criticised with words like 'don't know how to do business!'

Lian Fang Zhou didn't let it get to her.

"Fang Zhou, for what reason? We can't bring the charcoal back like this!" Li San Ge was also a bit agitated.

Lian Fang Zhou giggled. "Brother San Ge, don't be anxious! Of course, we'll sell the charcoal. It's just that we don't know the price, so how do we sell it?  Won't it be unfortunate, when we sell it at a loss? I was thinking like this.  We should leave one here to keep watch, and the other three goes off on their own and investigate last year's price of charcoal. This way we have something to base on, right?

"Ah!" Li San Ge slapped his own head. He laughed, "What you said is reasonable. Why did I not think of it!"

Uncle Li dipped his head in agreement. "Since it's like that, Fang Zhou, you stay here and keep watch. We'll go ask around."

"It's better to let Ah Jian stay here." Lian Fang Zhou vigilantly glanced at their surrounding. And jokingly said, "I can't suppress it if someone one comes looking for trouble!"

This made the four of them burst out laughing.

Uncle Li grinned. "Lian Fang Zhou really thought of everything! Might as well let you two wait here then."

Lian Fang Zhou is a girl, after all, so Uncle Li said this out with a kind heart.

However, Lian Fang Zhou had wanted to look around personally and urged, "It's enough with Ah Jian here. I also go. With the three of us asking around separately. We'll find out more about the situation with one more person.

Uncle Li and Li San Ge couldn't persuade Lian Fang Zhou, could only agree. The three of them discussed for a while and then moved out in three different directions.

The street that Lian Fang Zhou took happened to be the farmer's market.  She pretended to examine the wares on the stalls and asked when casually chatting around and imprinted into her mind.  Afterward, she went to sit at a tea spot for resting. In passing, Lian Fang Zhou asked a person who was drinking tea like her on their view of whether it was expensive or not.

After talking, she got the general gist of it.

When Lian Fang Zhou returned to where the cart stopped, Uncle Li and Li San Ge weren't back yet. But instead, she saw a young girl wearing a white damask long dress, claret vest scattered with floral design and a dark green belt hanging on her waist, like a servant attire, talking to Ah Jian.

She thought it was just a wealthy family wanting to buy charcoal, so didn't pay much heed to it. But when she got closer, she could hear the servant girl's words. Lian Fang Zhou's expression couldn't help change.

She heard the servant arrogantly told him, "I say, from your accent, you're not from here. So you must have come here to earn a living! This is easy to settle then! You follow me back. I promise you, our Master and Young Miss won't mistreat you! How much do you earn a month in your current place? Our Young Miss said we'll give you double that..."

What is the meaning of this?

Ah Jian was already impatient with the servant's pestering. When seeing Lian Fang Zhou return, he was overjoyed, and his face became a bit more high spirited as he called out. "Fang Zhou!"

The servant girl turned around to scrutinize Lian Fang Zhou upon hearing this. Subconsciously pouted her lips and stood there in a reserved manner.

"This miss, are you here to buy charcoal?" Lian Fang Zhou monotonously asked.

The servant girl harrumphed in disdain and steadily stared at her. "You can say that! Since our household use at least three to four thousands jins of charcoal in one winter. Although buying at this time is a bit early, but it's no matter. This bit of charcoal, I'll take it all doesn't make many differences!"

She continued with a smile. "Miss, these charcoal are yours?"

The servant girl then pointed at Ah Jian and questioned, "So then this guy work for you?"

Lian Fang Zhou's brows subconsciously tightened. She doesn't like the tone of this servant and the way she spoke. She replied, "Ah Jian is temporarily staying at our place."

I guess the clothing would be something like this... credit to Google Image sensei. This is from a chinese drama. Can't remember the name. I think it was something about competition between different departments in the palace, e.g. jewelry, clothing, etc. But it's been nearly several years, so may have mixed it up 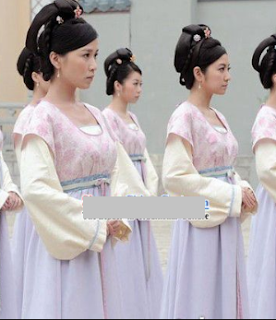